Every duck season I go through a shooting slump late in the season. Ducks fly faster in January and you have to take that into account.

I’ve hunted almost every shoot day during the past three weeks and I’ve been hitting a much lower percentage of my shots. On my last trip I concentrated on taking a long lead on my shots.  It’s the “aim to miss” strategy.

It’s hard to pull the trigger on shots that your senses tell you are off target, but that’s what I have to do to get a correction going. I’ve found that once you hit those shots that seem to be off target, you can re-calibrate your aim point and get back on target again.

Not all misses are due to under-leading your target, but most of them are. After two months of shooting at ducks and watching them fall, it’s hard to convince yourself that suddenly you’ve got the wrong lead.

Why? Not only do the birds fly faster, but they tend to give you longer shots. The variation is not large – maybe an extra five yards, but it adds up.

I remember a trip to Delevan National Wildlife Refuge about fifteen years ago. My partner, Tom Billingsley, and I had the first draw for a space blind. We picked the blind that had been the most successful during the season. We believed that we would have no trouble bagging limits of mallard and sprig.

We were somewhat correct, but until we began to swing faster and lead further, those late-season ducks were making us feel silly. In the end, we increased our leads and came home happy, but those ducks were really humming.

Not only does it help to swing fast and increase your leads, you may want to consider upping you load a bit. Going from steel fours to threes or even twos may help out.

That’s what I believe. Yesterday, I added two or three feet to my leads and the ducks began to fall more regularly.

On the way home from duck hunting yesterday, I took my guest, Scott Stouder, to San Luis National Wildlife Refuge to view the tule elk that are located inside a permanent high-fence enclosure.

Although we didn’t get close to the elk, I did manage to get a couple decent photos of bulls using my Nikon 300 MM lens.

These are very large bulls, they appear much larger than the bulls we see near our ranch.

In all we counted about 28 elk, of which eight or nine were bulls. This is a good place for viewing, especially if you’ve never seen a tule elk.

Wednesday was supposed to be a late arrival hunt, with my blind partner Tom Billingsley meeting me at the Kerry club about 8 AM.

Unfortunately, I remembered late that I had an appointment for 10 AM that Wednesday. I don’t normally schedule Wednesday appointments, but wasn’t planning to hunt until the day before.

Oh well, I called Tom and told him I’d have to hunt later. He went out to a vacated blind and limited in what must have been less than an hour as he called me back to report his  success about 8:30 AM.

At 10:30 I hopped into my truck and I was in the blind by about 1 PM. The club was vacant. Birds were rafted up in several areas and a brisk wind was still blowing out of the east.

For a while I passed on teal while waiting for a pintail. After a drake sprig finally came in, I missed a shot that was just a bit far – making me wish I’d waited a bit longer.

Then some teal came in close and I doubled. I was shooting my grandfather’s Remington SPORTSMAN 48 (semi-automatic). I really like it for ducks. Using #4 shot it’s deadly on decoying birds and it seems to fit me well.

Grandpa Fletcher put poly chokes on all our shotguns when I was about 12 years old and the Remington’s choke seems to work fine. For steel shot I set the choke at improved cylinder.

Once again I settled in to wait for pintail and finally one flew directly over and I dropped it. The pintail were being cautious.

So it went for the next hour and after shooting a gadwall by mistake, I finished out with my fifth teal. I’m not a fan of gadwall as I don’t like their taste – and I don’t know why anybody would.

On the way in, Lola posed for a picture with the ducks. She’s a bit camera shy. 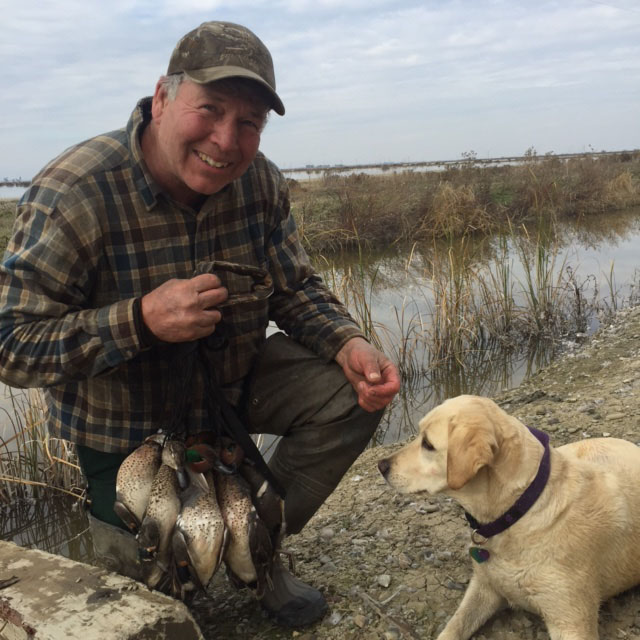 Saturday was a typical January day at the Kerry Club. Despite an early draw, I managed to get lost and found myself at the wrong blind. However, there were plenty of birds so I stuck it out for a limit of teal.

The birds flew over and passed by the blind at full speed which created a challenging pass-shooting situation. Ended up shooting a lot of shots, but eventually got seven, which was pretty much a given for the other hunters as well.