This is one of the big ones. I’ll be heading to Modoc National Forest on Friday and hunting for nine days. Here’s a link to a map of the area open for this hunt.

I’ve been up there twice to scout and haven’t seen many deer, but this is the time when they begin to arrive and the weather may be cooperating.

I’ll be setting up camp just outside the hunting area and I’ve got a bunch of ideas about how and where to hunt, but we’ll have to see what works.

Here are a few photos from my scouting trips. 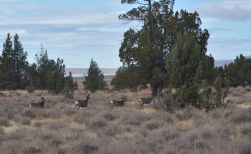 These deer were located north of Clear Lake in X2.

Nice to know where the horses are, but I’m not sure why.

If I don’t find the buck I’m after, the next stop will be the Doyle Muzzleloader hunt which starts on November 19.

The sunrise at Kerry Club blind 4 was spectacular as you can see. Take note that there are no ducks in the sky and that was pretty much the way it was.

Although there were some limits, my partner and I were not that successful. When we pulled the plug, around 10:45, we had three teal. After Lola found the one I’d sailed into a nearby tule patch, we had four.

We took the booby prize for low total, but we weren’t discouraged. There is plenty more hunting to be done. Good guys, Bob Birtel and John Staats, provided bloody Marys and great grilled sausage.

It was nice to see the crew again. I’m sure we’ll make up the deficit later on in the season.

We had a big party set for the quail opener. Invited about eight of our quail-hunting buddies. Then came the forecast. Who wants to hunt quail in the rain?

The crew dwindled from eight to six and then to five. On Friday four of us made it out to the ranch in the rain. The roads became treacherous. Hunter number five was coming in after dark, but thought better of it.

Then there was four. We ate well  on pork steaks  and venison chili. Then we built a nice fire to warm us. Sometime during the night the rain let up and when we awoke, the sky was blue.

It was a good nesting year for upland birds last spring. Quail broods probably set some kind of record. Turkeys did very well. Over at the duck club pheasants are looking good as well.

Last year eight of us brought in three quail. I didn’t fire a shot, but we had high hopes for this year and we were justified. We had been watching many coveys all summer long and throughout the deer season.

After about a five hour hunt in strong winds, the four of us came back to camp with 31 quail, nearly eight apiece. Here’s a hero photo taken by Joe DiDonato about two o’clock on Saturday afternoon. Left t right – me, cousin Wes and brother Rob. We’ll be eating quail. 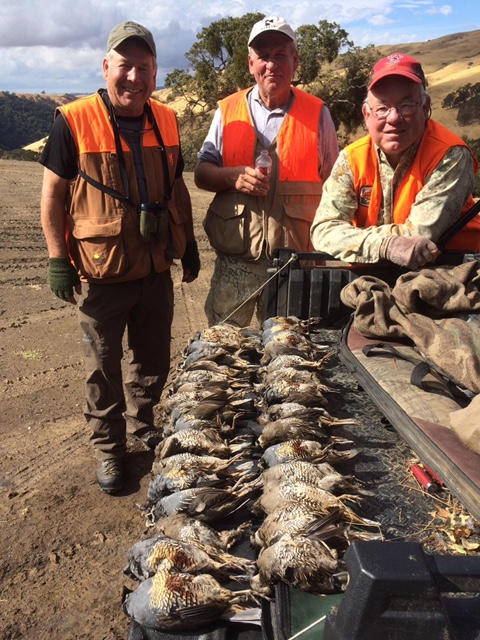 It wasn’t long after this photo was taken that serious dark clouds appeared over the horizon. About 30 minutes after that, the rain was falling again. We scurried home over roads that had been saturated the night before, dry as a bone at 9 AM and on their way to becoming saturated again as we drove out about 5 PM.

As an aside, we did see six bucks while looking for quail. One of them was a nice buck and was probably the one I missed on opening day. A couple of them were spikes – the rest small forked horns.

One the way home, I spotted another buck just as I left our property and later we got a good look at a six-point tule elk. At one of the ponds a flock of about 20 mallards huddled out of the strong winds and it looked like they were all greenheads. Then we were back to the pavement.

Next week is the duck opener. The forecast is for 80 degrees and sunny. That will be fine with me.

Hunting during the rut is wonderful because you have chances at bucks that you may never see otherwise. Last season I killed my Montana buck during the second week in November. It’s not a giant buck, but it is a mature buck with long tines. I was very happy with him.

That is, I was very happy until it came time to eat him. I tried him straight up –  fried strips of pure venison on a hot skillet with salt pepper and flour. Normally delicious, but not with this buck.

I made some summer sausage and concluded that it was a waste of good material.

Then the meat sat in my freezer while I wondered if I’d be able to eat it at all. Then my brother offered to return the remaining venison from what I’d given him, another bad sign.

With more rutty venison that I cared to think about, I needed to find a solution. Then I remembered that I had purchased a gift basket at one of our MDF fundraisers and the basket contained several seasoning mixes donated by John McGannon of WILDEATS Enterprises.  One of the seasonings was a chili blend that he calls, Controlled Burn. 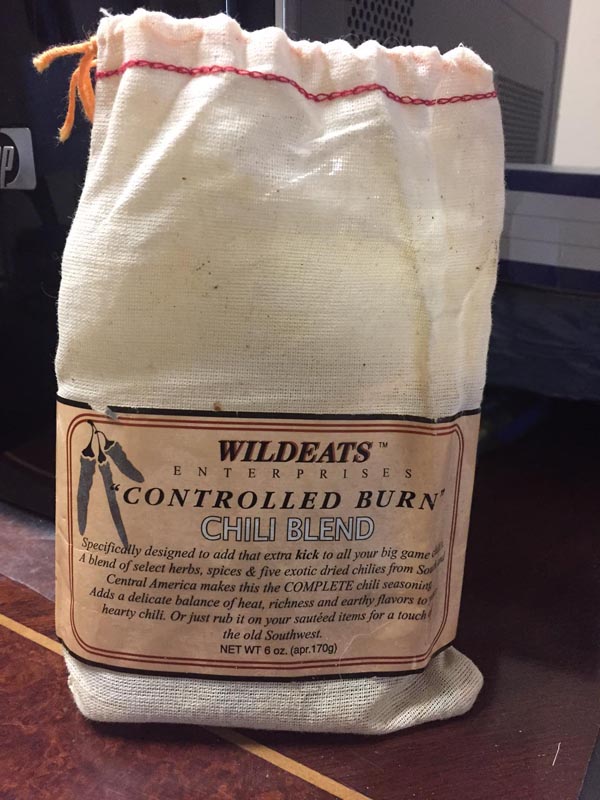 I found that package in our cupboard and read the instructions. Looked perfect.

After some defrosting and a trip to the grocery store, I was ready for action. With a celery base, two yellow onions, one green bell pepper, five pounds of venison, several cans of tomato sauce and pulp, several shakes of tobasco sauce,  and a bottle of zinfandel, it had all the right stuff. Oh yeah, also a have cup of Controlled Burn.

Following the WILDEATS directions and after a half hour of chopping celery, onions and a bell pepper, I browned the venison and then added the  huge pile of chopped good stuff into the large sauce pan while the meat waited in a large pot along with the tomato sauces. It took a while to wilt the celery, onions and bell pepper mix, but before long I tossed everything into the pot and finished it off on low heat.

I’ve now done this twice and the results are wonderful. The rutty buck  is gone. Four of us feasted on chili this weekend on the eve of our annual our quail hunt and everybody was happy. The remainder is packaged in half a dozen vacuum bags which I froze and then sealed in my vacuum sealer. It won’t last long.

Spent four and a half days scouting in the north country, mostly in Zone X2. Covered a lot of ground – all the way into Oregon.

Departed Monday morning and made it to Devil’s Garden (Deer Zone X2) before sunset, but didn’t make camp until well after dark. Woke up at the base of Blue Mountain on Tuesday morning and headed up the Mowitz-Crowder Flat Road towards Oregon.

Found quite a few hunters camped at Janes Reservoir. One hunter, who had filled his tag the day before, said that most of the hunters were finding deer in a nearby burn. That’s where he shot his buck the day before. He showed me a photo of the buck and it was a good one.

Later on I drove to the burn, but (although I did see some deer there) it was too crowded for my comfort. I headed north into Oregon and got lost.

After a stop in Klamath Falls to purchase a motorcycle helmet (needed to get legal before unloading my ATV), I ventured into the desolate country north of Clear Lake and found a quiet spot to spend the night. It was quite peaceful there, but only found a couple does and their fawns. 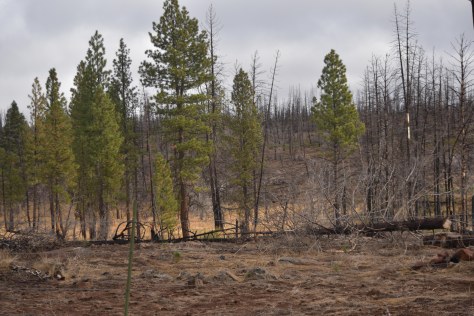 Nice to know where the horses are, but I’m not sure why.

These deer were located north of Clear Lake in X2.

After a tire-grinding ride over the lava rock of  the Steele Swamp (a misnomer this time of year), I concluded that it was best I to head back towards Tulelake and complete the circle by driving back through the Garden on the south side of Clear Lake and then returned to the Mowitz Road where I headed south and spent the night at the Reservoir F campground.

Got up early on Thursday morning and was parked and ready to go for a walk before sunrise. As the sun peeked over the horizon I climbed a small rise with a great view of the country-side. I could see for miles, but a low fog over clear lake prevented me from seeing the Lake itself. Lots of sage brush, juniper and manzanita.

Found a guzzler that was well charged with water and one pile of elk scat, but no deer tracks. At one point I thought I heard a bull elk let out a short toot, but couldn’t be sure. 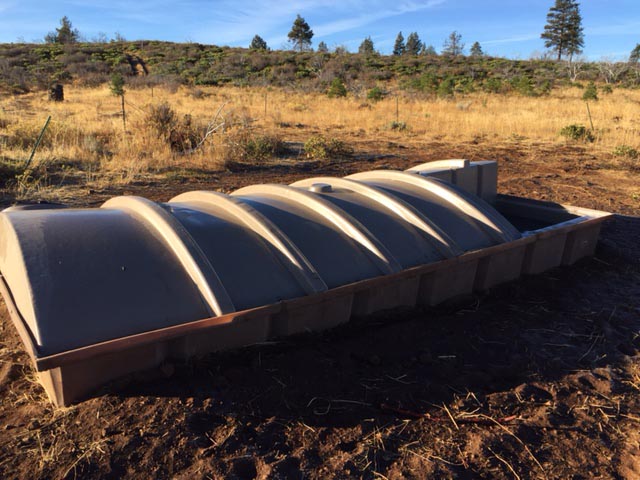 One thing that was for sure was that the deer had not yet moved into the area. However, I am quite confident that by November there will be deer and maybe the big one I’m looking for.

Nice to be able to anticipate the possibility of running into what could be a lifetime size buck. Now I need to spend some time shooting my muzzleloader during the next couple weeks.

A little late reporting. Been traveling north looking for a big buck in Devil’s Garden, X5a, X5b or X6. More on that later. 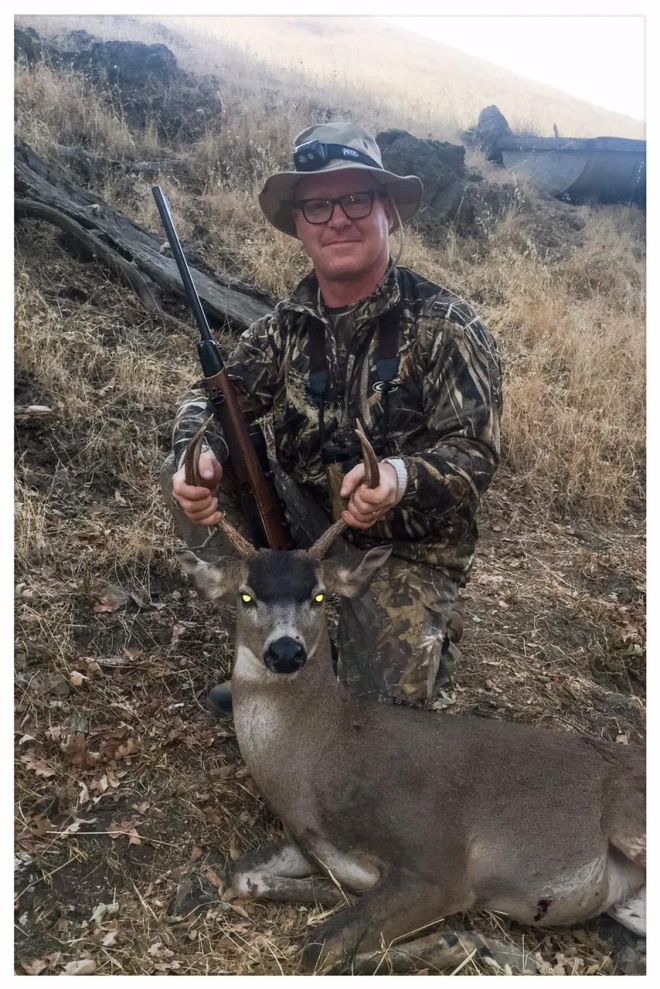 It was the third buck of his still young deer hunting career after staying home last year to be with his young family. However, this year he was back and made a nice shot from 280 yards to take this buck, which was chasing a doe.

On the last Friday of the season, Joe DiDonato found a buck chasing a doe and stalked in pretty close to shoot this nice 3X3. He took this photo of himself using the timer on his camera. Came out nice in the late afternoon sunlight.

The rest of the weekend was relatively uneventful, but Rob did find a big buck late on Sunday, but obligations at home called for a premature end to the hunt. At least we know there’s one big one left for next season.