The ferruginous hawks belong to the broad wing family and are buteos  as are the red-tailed hawks and red-shouldered hawks. They hunt from the air or from perches and they glide in the thermals along with the eagles and vultures.

These photographs are not great, but they will clearly show the marking of a light morph ferruginous hawk. 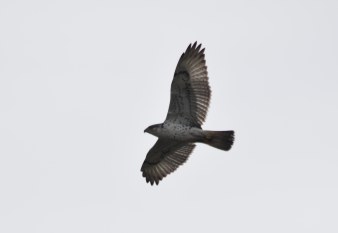 For comparison, here are a couple red-tailed hawk photos. 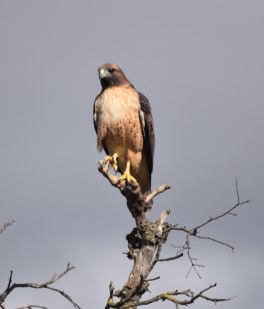 In California habitats red-tailed hawks are usually the most common large raptor.

On the way home from the ranch last week, I spotted two ravens and something else in the grass about 150 yards off the road. I figured it might be something interesting so I began taking photos before I’d identified the target.

Turns out it was a golden eagle guarding a ground squirrel that it had just killed.

Eventually the eagle spotted my truck and got nervous. He took off with the squirrel in his grasp, but it wasn’t long before he dropped it.

I snapped a  couple shots as he flew by.

I felt bad that he left his meal behind, but I’m sure the ravens made short work of it.

Every once in a while a few photos are compelling. After I photographed a red-tailed hawk in flight a few days ago, I had the feeling that the photos would be exceptional. 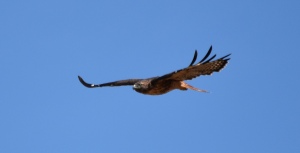 Not as exciting as Alberta, but it’s always nice to see a band on a downed bird. I’ll receive a certificate down the road and it will probably give me more information about the location where the bird was banded, age of bird and who  banded it. Just for the fun of it I may give them a call.

About fifteen years ago, I spent one summer as a bander at the Golden Gate Raptor Observatory. Once each week I would drive to the Golden Gate Recreation Area and spend a day catching and banding raptors.

Since I was a rookie, I didn’t get to catch and band as many raptors as some of the regulars, but I got to do my share. It was exciting waiting and anticipating the capture and very educational holding and banding the birds.

It was most exciting when one of the bands from a bird I banded, a sharp shinned hawk, was recovered and reported.

Typical birds were red-tailed hawks, Cooper’s hawks and sharp shinned hawks. We captured most of  them with bow nets and mist nets.

And, those suckers can really sink their claws into you if you make a wrong move, which happened with the sharpie mentioned above.

The bait for attracting the raptors was live pigeons and starlings. Red tails would line up on those birds from far away and come down in a blur. Most of the time a quick release of the bow net would save the bait bird from injury, but not always.

It was an interesting look at an unusual facit of wildlife conservation.