Over a month ago, a pair of white-tailed kites moved into our neighborhood. They were very visible and very out of place.

The neighbors behind me have a large back yard with redwood trees and live oaks. They were selling their house and had moved out, leaving it vacant. The house sold quickly and nobody appeared for several weeks.

The kites took over one of the live oak trees and seemed to be building a nest and mating activities began.

Then, after a couple weeks, although the nest was not visible to us, it seemed that eggs must present. Several times, we observed the kites chasing off invading ravens.

Three or four times I nearly retrieved my camera during moments when the kites perched on the very top of the large redwoods.

I feared that the new neighbors would move in and disturb the nest before the chicks were hatched and gone. It seemed unlikely that the duo would succeed in their efforts.

Escrow closed last Friday and yesterday the new neighbors hired a tree service to trim the trees in their new back yard. At 8:00 AM, the chain saws began to buzz.

An army of tree trimmers invaded the live oaks.

The kites are gone now, which is not surprising. Wish I’d taken that picture.

A few weeks ago, my brother told me that he’d been hearing a strange animal making a sound from the trail behind his house. He described the sound as half way between a coyote and a cat sound. Our friend Joe said that is was the sound of a gray fox.

A few days after Rob told me about hearing the gray fox that lived behind his house, I was walking Lola Dioji along a street near my home. It was about 7:30 AM when the calls of a couple crows caught my attention. They were harassing something and that thing turned out to be a gray fox that crossed the street 50 yards in front of me. I watched as the crows continued to caw and the fox disappeared between fences surrounding a drainage easement where it could spend its day undisturbed as the drainage ditch is seldom accessed by people. How crows love to harass predators.

Gray foxes are very attractive creatures with gray and red pelts. I seen quite a few over the years, but they are typically nocturnal.

A few years ago, we set up a trail camera at the site of a gut pile from a blacktail buck we’d shot. A few hours after dark, we retrieved the camera and gray foxes had already visited the site. 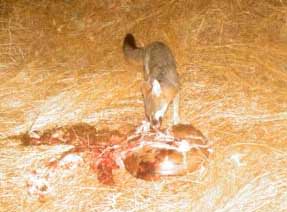 This past tuesday I was on my way to Mayberry to attend our airial spraying and help fix a leaking berm. As I drove down a street near where I’d seen the gray fox a week earlier, I spotted a dead animal on the side of the road. Could it be the gray fox? I stopped my truck and backed up. Sure enough, a gray fox lay along the white line of the bicylce path on the side of the road. The City Fox had suffered a premature death. Too bad, I’d like to have seen him again under better circumstances. 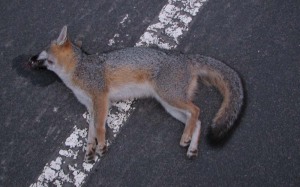