Here are photos of some of the brown bears we observed on the Copper River fishing trip. 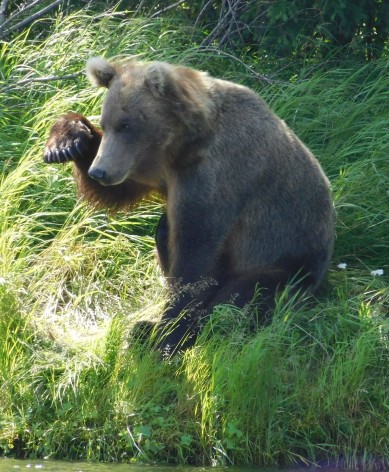 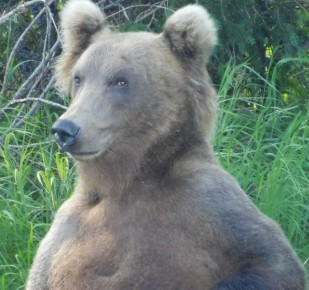 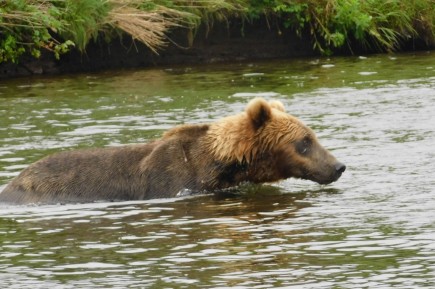 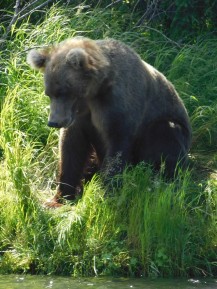 We were on the Copper River for five days with Jack Johnson of the Alaska Legends Lodge. The sockeyes arrived two days before we did. There were plenty of them. The trout were scarce. We spent some time trying to catch them too, but the big ones mostly broke off.

For the most part we cast pink and green sockeye flies at the fish with six to eight weight rods and ten to twelve pound leaders. The sockeyes were very fresh and very strong. They fought like crazy, jumping and cartwheeling. We may have caught 50% of what we hooked.

For trout we tried a lot of flies. I hooked a large rainbow with a cadis imitation dry fly, but couldn’t keep him on. A fly called the Dolly Llama hooked the most trout, but again we failed to land the largest of the bunch.

Typical size for the sockeyes was five to eight pounds, with a few outliers.

Best photo of the trip:

This sow and cubs passed by close on our last day of fishing. 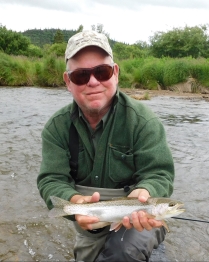 Rob caught this nice rainbow which was one of the larger trout we caught. It was too early in the run for the big flesh-eating trout.

Caught this salmon on a dry fly while trout fishing. 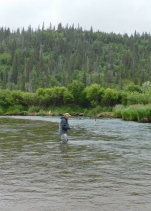 I’m fishing for trout as a brown bear snorkels for sockeye salmon about 20 yards up stream. You can see his ears only.

Joe DiDonato with a nice sockeye. 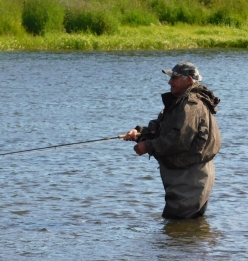 Guides Jack and Mike driving the boat with two engines. 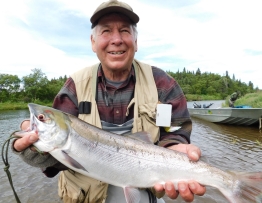 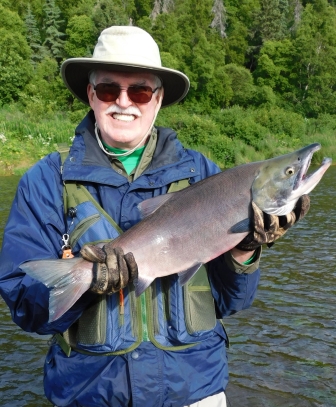 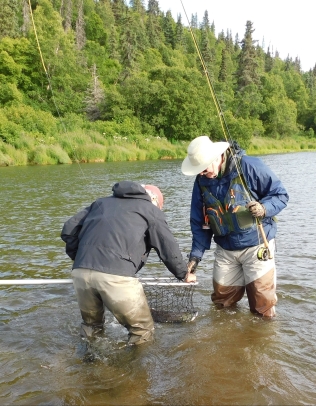 The Beaver departs camp on day one.

Bob fights fish while guide Mike waits at the net.

Me and five buddies will be landing at Lake Iliamna on Friday. Were going to spend five days with Jack Johnson at the Alaska Legends Lodge. Purchased the trip as a group almost two years ago.

The plan is to catch a bunch of sockeye salmon and also some of the huge rainbows that follow the salmon up stream during July.

All fly fishing. My bags are packed. I’ll probably unpack and pack them again later today.

Hopefully I’ll have some great pictures upon return. Here’s my draft check list.

Saturday was shopping day. Costco was my destination.

Ibuprofen was the top of my list. Out for more than 12 hours, I needed the discount box.

Next came some of my favorite sausages and Atlantic salmon for Linda.

As I rounded a corner in the meat section, I spied something I’d been wanting to cook ever since I acquired my Traeger barbecue – a beef brisket. 14.7 pounds at $3.99 per pound.

Immediately I was aware that I might have trouble finding enough eaters. What the hell, I thought, Linda and I will eat what we can and we’ll figure out what to do with the leftovers.

I snatched up the fourteen pounder and headed home.

Called my dad and invited him over. Tried my brother, but he had plans already.

Looked up the Beef Brisket recipe in the cookbook. Beginner’s brisket. That’s me.

Immediately I saw my challenge. It would take somewhere between 8 and 12 hours to properly cook the brisket. Oh well, start early.

At 7:30 AM I plopped the fourteen pounder onto my grill – properly smothered with beef rub from Lockford’s Meat and Sausage. Good stuff.

With the Traeger temperature on smoke, 185 degrees F I grabbed Lola’s leash and headed around the block for a walk.

Arriving home, I sprayed the beef with the mop sauce and turned the heat up to 225 after four hours.

The meat temperature was now 142 degrees – a little low with only four or five hours to go. I told my dad I’d call him once I knew when the meat would be ready. Then I made arrangements for a conference call to take place on Monday.

With that task completed, I sprayed more mop sauce and turned my radio to the Giants vs As.

At 2 PM, the meat temp was barely 150. The Traeger guide said to be patient and don’t rush the process. I was getting impatient. At least the Giants were ahead.

About 3:30 PM, the meat temp was only 160 and I needed it to be at 180+ plus in order for the brisket to be done by five. Called dad and uninvited him. At his age, he needs to eat on a schedule.

Linda and I sat down to chat while the Traeger continued to smoke. I told her maybe the meat would be ready by 6 PM. She said OK. I opened a bottle of zinfandel and began to sip impatiently.

Continuing to spray the mop sauce periodically, I decided to raise the temp to 250 and began to see improvement. My two temperature gauges were now at 170 and 183 degrees.

I finished half the bottle of zin and the Giants lost. I looked at my iPhone and the time was 6 PM. One temperature gauge said 193 and the other said 180. I elected to cut the brisket in half and put the thick part in my cooler to keep cooking. The thin part of the brisket went to the kitchen where I cut it up appropriately.

My plate was covered in fantastic looking beef. It was fantastic. I over-ate so much that it’s now 10:25 PM and my stomach is still bloated. Oh well, I confirmed that beef brisket is awesome.

A quick internet search confirmed that there are many recipes for left over beef brisket.

If you followed my first couple vacation home posts, you may have got the idea that I was cooling off on the first choice. On the last week of June, I bailed out of the first Lake Almanor home. Too many issues for me. Dry rot, water leaks, bats, ants, wood pecker holes, septic problems….you name it.

Amazingly, a second home came on the market at the right time. I immediately contacted my agent and viewed the home. Although Linda had not seen the home, we agreed to make an offer. We are now two weeks into the purchase and things are looking pretty good.

It’s in much better shape than the first home, has a much better exposure and a much water beach/water access.

Yes it also cost more, but we’re moving forward. I’m glad we decided to reverse course on the first home and I’m hoping that this next contract will work out. Sometimes you have to fail in order to succeed.